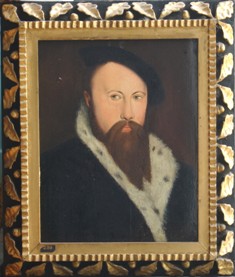 Sir Thomas Wyatt the Elder was born c.1503 and died 1542. The son of Sir Henry Wyatt, he became a Sheriff of Kent in 1522, and by 1524 held positions at court, including that of Privy Councillor.  He undertook foreign diplomatic missions from 1526, becoming High Marshal in Calais from 1528 – 30, achieving a knighthood in 1535. Such closeness to the Tudor Court brought danger as well as success and he was imprisoned at the time of the fall and execution of Anne Boleyn.  Following his release in 1536, which was partly orchestrated by Thomas Cromwell, his diplomatic and ambassadorial duties continued, and in these he was often accompanied by his young son, Sir Thomas. The aim was to maintain a position for Henry Vlll in the power politics of Charles V, Holy Roman Emperor, and Francois l of France. Imprisoned again in 1541 in the aftermath of the death of Cromwell, he was released in the same year and rehabilitated at Court.  He was required to resume diplomacy and died the following year, 1542 at Sherborne in Dorset on his return, ill, to England.

As befell many courtiers of the time, he received gifts of land and estates from the King, but his main residence was at Allington.  He had many connections with friends and other families in Kent, including the Boleyns, the Culeppers, and by marriage, the Brookes at Cobham.

His later standing as a cultivated and inspirational poet and essayist rests mainly on the rediscovery and compilation of his writings in the 19th and 20th century. No work was published in his lifetime; ‘Certain Psalmes…in English Metre’ appeared in 1549, and some poetry, lyrics and satires in Tottels’s ‘Miscellany’of 1557.  In the 20th century, he came to be valued as a poet of variety and invention, a satirist of Court life and the introducer of the Italian sonnet form into English. He  ‘assimilated European forms of verse and a Chaucerian poetic vocabulary’ reflecting the needful  ‘indirectness of the courtier and diplomat’.  For example,

‘They flee from me that sometime did me seek

With naked foot, stalking in my chamber…’

A preparatory study in chalk and ink for a portrait by Hans Holbein in 1535 is now in the Royal Collection at Windsor. This study is most likely to have been the basis for a painting, in oils on wood, by Richard Dalton in the 1540’s, which is in the National Portrait Collection and now exhibited at Montacute House. There are subsequent copies of this, unattributed, from the 18th century and 19th century. The Bradbourne portrait resembles these and is attributed to Herbert Luther Smith.

{The KAS collection includes a number of Twysden/Twisden family portraits that are currently housed at Bradbourne House. When, in November 1937 Sir John Ramskill Twisden died leaving no heir these portraits were bequeathed mainly to the Kent Archaeological Society, with others going to the National Portrait Gallery.  When Bradbourne House was purchased, by what later became the East Malling Trust, it was decided that the KAS portraits should be displayed in the house. The National Gallery then returned their portraits so that the collection could be kept together. Today the portraits hang in the Great Hall, main hallway and staircase at Bradbourne House.}

Ousby, I. 1992. Cambridge Guide to Literature in English. Cambridge.