"The National Roman Fabric Reference Collection: a handbook" is now live on the Study Group for Roman Pottery website. 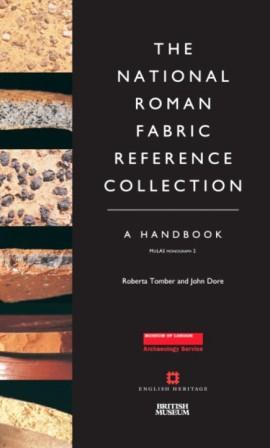 The establishment of a national reference collection for pottery of the Roman period has been discussed since 1972, when it was proposed by Dame Kathleen Kenyon at the first meeting of the Study Group for Romano-British Pottery held in Oxford (Detsicas 1973). Informal and sporadic discussion of the need for a collection has continued since, particularly after the publication of the Guidelines for the processing and publication of Roman pottery from excavations (Young 1980). In March 1986 a meeting was held at the British Museum to discuss the feasibility of establishing collections for all periods. While there was agreement on the need, and that separate collections should be maintained for the different periods, no further action resulted.

The results presented here stem from the survey of the Current state of Romano-British pottery studies undertaken by Professor Mike Fulford at the request of English Heritage, which made explicit recommendations for the establishment of both national and regional fabric collections (Fulford & Huddlestone 1991, 52). In November 1992, at an EGM of the Study Group for Roman Pottery, it was agreed that a national collection should take precedence, providing a basis and model for regional ones. The initiative and full funding for this project (National Roman Fabric Reference Collection – NRFRC), including this publication, was provided by English Heritage. The work was undertaken by the Museum of London Archaeology Service with support from the British Museum (Departments of Prehistoric & Romano-British Antiquities and Scientific Research).

This project has been outlined in Britannia (Tomber & Dore 1996) in order to summarise and to draw public attention to the collection. In rare instances details given there may differ, and this handbook should be considered the definitive statement.