Online event - Caesar in Kent: Do We Now Know Where He Landed?

A live discussion about the evidence and theories around Caesar’s landings at Pegwell  Bay and elsewhere. 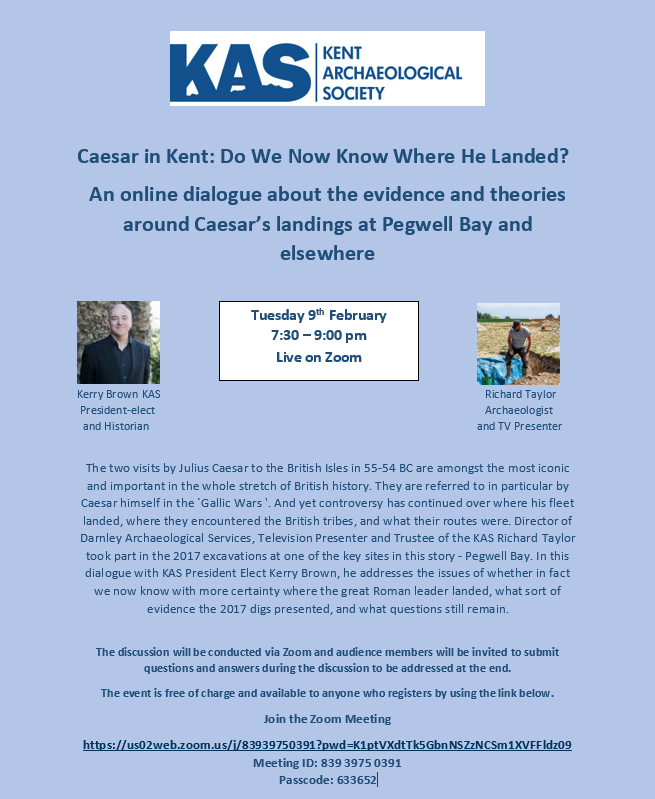 The two visits by Julius Caesar to the British Isles in 55-54 BC are amongst the most iconic and important in the whole stretch of British history. They are referred to in particular by Caesar himself in the `Gallic Wars '. And yet controversy has continued over where his fleet landed, where they encountered the British tribes, and what their routes were. Director of Darnley Archaeological Services, Television Presenter and Trustee of the KAS Richard Taylor took part in the 2017 excavations at one of the key sites in this story - Pegwell Bay. In this dialogue with KAS President Elect Kerry Brown, he addresses the issues of whether in fact we now know with more certainty where the great Roman leader landed, what sort of evidence the 2017 digs presented, and what questions still remain.

The discussion will be conducted via Zoom and audience members will be invited to submit questions and answers during the discussion to be addressed at the end.